Andy has served as president of the Ohio Chamber of Commerce since April 1993. In the twenty plus years he has been at the helm, Andy has helped define the Ohio Chamber as an elite organization that takes a common- sense, solutions- oriented approach to enhancing Ohio’s business community. 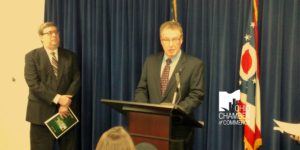 In addition to signing the paychecks, Doehrel works with legislators, business leaders and government officials every day on issues affecting Ohio Chamber member companies. He also specializes in labor issues including workers’ compensation, product liability law, civil justice reform and regulatory practices. In fact, he has played a primary role in the passage of several key Ohio workers’ compensation reform laws over the years and continues to be a key figure in refinement of the program.

“I love working at the Ohio Chamber, which is why I have been here so long. I get to come to work every day with the ability to make an impact on Ohio. I firmly believe in the mission of the Ohio Chamber and enjoy working with our staff and members to create sound public policy that helps businesses thrive,” Doehrel stated.

Prior to his position as president, Doehrel was the executive vice president and general counsel, in which he directed the Ohio Chamber’s full-time legislative team.

Believe it or not, he actually has worked outside the Ohio Chamber. Prior to begining his tenure here, Doehrel was a partner at an occupational safety and health consulting firm. He also served as program director for Ohio’s OSHA on-site consultation program and spent four years as staff legal counsel for the Ohio Department of Industrial Relations.

Doehrel graduated from Capital Law School in 1977 with a juris doctorate degree.

Editor’s note: we will have a monthly staff spotlight on our blog. Next up is our Director of Tax and Economic Policy, Jeff McClain.