The Freshman Class of 2017 is a diverse group. The General Assembly will count a plumber, former Speaker of the House, a former U.S. Congressman, farmer and countless other professions as additions to their ranks this year.

* As defined, the freshman class of 2017 includes legislators that were appointed during the 131st General Assembly and the November General Election was the first time they appeared on the ballot for the position. It does not include the members who swapped to the opposite chamber. 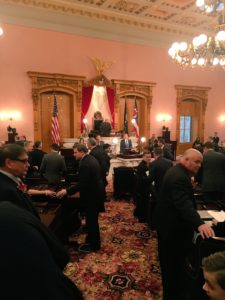 Steve Arndt (R-Port Clinton)-Rep. Arndt was appointed in September of 2015 to replace Rep. Steve Kraus following the latter’s felony conviction which forced him to resign from office. Mr. Arndt has served in various local offices since the 1970’s, most recently Ottawa County Commissioner prior to his appointment. Additionally, he has owned multiple businesses in northwest Ohio.

John Boccieri (D-Alliance)-Rep. Boccieri was appointed in September of 2015 to replace Rep. Ron Gerberry following his resignation. Mr. Boccieri is no stranger to public service, having served in the Ohio House & Senate from 2001-08 before serving one term as a U.S Congressman to Ohio’s 11th District.

Kristin Boggs (D-Columbus)-Rep. Kristin Boggs was appointed in January of 2015 to replace Rep. Mike Stinziano, who vacated his seat for a position on Columbus City Council. Ms. Boggs is the daughter of Robert Boggs, a former member of the General Assembly, as well as Director of Agriculture under Gov. Ted Strickland. Ms. Boggs most recently served as an Assistant Ohio Attorney General, focusing on predatory lending and wages.

Matt Dolan (R-Chagrin Falls)-Sen. Matt Dolan replaces now-Rep. Tom Patton as the Representative to Ohio’s 24th Senate District. Mr. Dolan previously served as a State Representative from 2005-10. He is currently a partner at the law firm of Thrasher, Dinsmore & Dolan.

Bill Dean (R-Xenia)-Rep. Bill Dean was appointed in the spring of 2016 to replace now Sen. Bob Hackett, who took over for outgoing Sen. Chris Widener. Mr. Dean was considered by many to be a dark-horse candidate in the primary field of four. He carried 38% of the vote and was appointed by the House Republican Caucus for the unexpired term. Mr. Dean is the owner and operator of Dean’s Plumbing in Xenia. Mr. Dean is the father-in-law of Rep. Ron Hood, who encouraged him to run for office.

Theresa Gavarone (R-Bowling Green)-Rep. Theresa Gavarone was appointed in August of 2016 to replace Rep. Tim Brown, who resigned to take a position as the President of the Toledo Metropolitan Area Council of Governments. Ms. Gavarone is an attorney at the Ruck & Wright Law Firm and was previously elected to two terms on Bowling Green City Council.  Additionally, Ms. Gavarone and her husband Jim own and operate Mr. Spots Philadelphia Steak Sandwich, also in Bowling Green.

Wes Goodman (R-Cardington)-Rep. Wes Goodman was appointed to serve in the lame-duck session of the 131st General Assembly following the early departure of Rep. Jeff McClain for a position here at the Ohio Chamber of Commerce. Mr. Goodman served as a legislative staffer in Washington D.C. and most recently as a grassroots activist for various advocacy campaigns.

Frank Hoagland (R-Adena)-Sen. Frank Hoagland’s victory over incumbent Democrat Sen. Lou Gentile was undoubtedly the upset of the evening as far as General Assembly contests go. Mr. Hoagland defeated Sen. Gentile 53-47% in a district that has traditionally elected Democrats. Mr. Hoagland is new to elected office. He is a retired United States Navy SEAL and is the owner of 360 Safe Solutions, a security consulting firm. 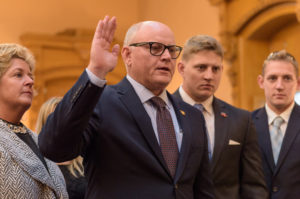 Larry Householder (R-Glenford)-Rep. Larry Householder replaces Rep. Bill Hayes who was elected Licking County Prosecutor in the November General Election. Mr. Householder is the former Speaker of the Ohio House, having served as leader from 2001-04. His familiarity with Capitol Square will help Mr. Householder become a key player as a freshman member of the General Assembly.

Matt Huffman (R-Lima)-Sen. Matt Huffman replaces now-Representative and former Senate President Keith Faber who was term-limited in 2016. Mr. Huffman previously served in the House up until 2014 where he served as the head of the Ohio House GOP’s campaign arm. His campaign leadership will serve the GOP in the upper chamber well as they head into a challenging 2018 election cycle.

Catherine Ingram (D-Cincinnati)-Rep. Catherine Ingram replaces Rep. Christie Bryant Kuhns who chose not to seek a second term. Ms. Ingram previously served as a member of the Cincinnati Board of Education for 20 years. In addition to her role on the school board, Ms. Ingram is an active member of many community groups and serves as an instructor and independent consultant at Northern Kentucky University.

Candice Keller (R-Middletown)-Rep. Candice Keller replaces Rep. Tim Derickson who was term-limited. Ms. Keller won her primary against Middletown Councilman Joe Mulligan by a large margin. Professionally, Ms. Keller has been the Executive Director of the Community Pregnancy Center for the past ten years. The organization is one of the largest pro-life non-profit agencies in Ohio.

Bernadine Kent (D-Columbus)-Rep. Bernadine Kennedy Kent replaces Rep. Kevin Boyce who was elected to Franklin County Commissioner. Ms. Kent has served as an educator and administrator within the Columbus City School District. Most notably, Ms. Kent was the whistleblower in the data tampering, identity theft, and tutoring fraud occurring within her school district.

Darrell Kick (R-Loudonville)-Rep. Darrell Kick replaces term-limited Rep. Dave Hall. Mr. Kick is new to public service in the capacity of an elected official. He is no stranger to the institution, having previously served as District Director for Congressman Bob Gibbs. Mr. Kick operated his family’s dairy farm in Loudonville prior to joining Congressman Gibb’s team.

Scott Lipps (R-Franklin)-Rep. Scott Lipps won his primary in 2016 by a few hundred votes in conservative Warren County. He replaces term-limited Rep. Ron Maag. Mr. Lipps previously served as Franklin City Mayor and on City Council. He is a successful small business owner and recently sat on the state board of NFIB.

Adam Miller (D-Marble Cliff)-Rep. Adam Miller replaces outgoing Rep. Mike Curtin who chose not to seek re-election. Mr. Miller is a partner at the Taft Law Firm in Columbus where he focuses on public law and education litigation practice areas. He previously served on the Grandview Heights Board of Education and is a Lieutenant Colonel in the U.S. Army Reserve.

Craig Riedel (R-Defiance)-Rep. Craig Riedel defeated incumbent Rep. Tony Burkley in the 2016 primary. Rep. Burkley was the only sitting member of the General Assembly to lose during the primary election. Mr. Riedel retired from his position as an executive at Nucor Steel in 2015 to pursue a position in public office.