Tonight, we saw victory for Issue 1, Marsy’s law, and a sound defeat of issue 2, the Deceptive Rx Plan. Here are the results from both statewide ballot initiatives as well as the results of the races we were watching throughout the state. 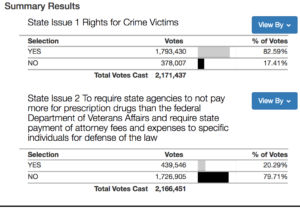 The latest in a long line of misguided attempts to enact a local measure to ban “fracking,” or pipelines, or injection wells, is this proposed city charter amendment in Bowling Green. Like all of the other previous, similar efforts – often dubbed “community bills of rights” – that preceded this one across Ohio, it will have no actual impact on the oil and gas industry, which is regulated by the state, or on pipelines, which are regulated by the state and/or federal government. However, our friends at the Bowling Green Chamber of Commerce pointed out the troubling, actual impact: “Passage essentially puts a sign on the city limits proclaiming ‘Bowling Green is closed for business.’”

Mayor John Cranley, seeking a second term, finished second to Yvette Simpson in a three-way primary in May. She captured 45% of the vote to Mayor Cranley’s 34%. (Rob Richardson, now running for State Treasurer as a Democrat, was a distant third.) Now, the two Democrats are squaring off head-to-head in an officially nonpartisan clash – the most expensive mayoral campaign in the city’s history.

MAYOR JACKSON ROLLING ON ZACK REED, UP 21% WITH 61% OF PRECINCTS REPORTING

DEM MAYOR NAN WHALEY MOVES ON TO GUBERNATORIAL PRIMARY IN MAY

There isn’t really a race here, as incumbent Mayor Nan Whaley is running unopposed. But we put it on this list because she’s an announced candidate for the Democratic gubernatorial nomination.

This open seat, three-way race featuring Republican Dave Scheffler, Democrat Greg Russell and Independent Clayton Lunsford is of particular interest to the Ohio Chamber of Commerce. That’s because Scheffler, a retired CPA, is a former Chairman of the Board of the Ohio Chamber. He served as chairman from 2003-2005. This is Scheffler’s first attempt for public office, while Russell served previously on city council and was the Democrats’ unsuccessful mayoral candidate in 2015. Lunsford is an 18-year old Lancaster High School senior.

The most significant Republican vs. Democrat battle in the state in 2017 is this race between GOP challenger Keith Cheney and longtime incumbent Mayor David Berger. Berger is asking the city’s voters to reward him with an eighth term as mayor. Cheney, formerly the chief operating officer for Certified Convenience Stores, is also the Allen County Republican Party Chairman.

Democrat Paula Hicks-Hudson, then council president, ascended to mayor following the death of Mayor Mike Collins in 2015, and was elected later that year to complete the remainder of his four-year term. Her opponent for a full-term is Wade Kapszukiewicz, who has been Lucas County Treasurer since 2005. The two Democrats were the top two vote-getters in the September primary. The incumbent has the Lucas County Democratic Party endorsement.