This year marks 125 years of the Ohio Chamber advocating for Ohio businesses, creating a milestone for this year’s Annual Meeting & Legislative Reception. This event, held every spring, brings together members of the Ohio General Assembly and many of our most active business leaders. After the guest speakers and awards, a legislative reception provides an opportunity to network and build those 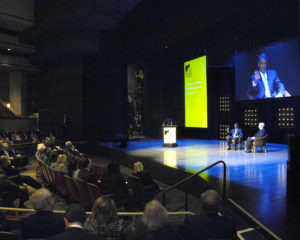 Join us for the 125th Annual Meeting at the Sheraton Hotel in Downtown Columbus on April 18 from 3:30 p.m. – 7:00 p.m. This year’s presenting sponsor is The Ohio State University, with our featured speaker, OSU Head Football Coach Urban Meyer. Tickets are at a special price this year of $50 per person, but space is limited, so register today!

Prior to the Annual Meeting, Chamber Day will be held at the Sheraton as well. This event is for Local Chambers of Commerce and their guests only, so please make sure to check this box on your registration if you plan to attend.

For Local Chambers of Commerce and their guests only 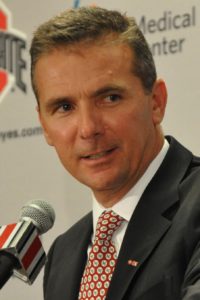 Ohio State University head football coach Urban Meyer is 73-8 through six seasons leading one of the most storied programs in college football. He has coached the Buckeyes to a national championship in 2014 – the program’s eighth – by winning the first College Football Playoff (CFP), to a repeat appearance in the CFP in 2017, to six consecutive Big Ten conference divisional titles, to Big Ten championships in 2017 and 2014, to a 47-3 record in Big Ten games and to a 19-5 record versus ranked teams.

He has done this by developing and overseeing a program culture that requires accountability, promotes respect, prepares young men for life after football and develops football skill sets and talents at an unsurpassed rate: his program has produced 33 NFL draft picks the last five years, including 10 first-round picks and record numbers of draft picks through the second, third and fourth rounds of the 2016 NFL Draft.

And his team members are getting it done in the classroom, as well. Ohio State Buckeyes have earned four academic All-American honorees the past three years, one National Football Foundation Scholar-Athlete award and the team is coming off its finest academic semester under Meyer with record numbers of students with 3.0 (or above) grade point averages for the semester and cumulatively.

These first 16 years as a head coach for Meyer, featuring three national championships and a record of 177 wins against just 31 losses for an .851 winning percentage, have been full of accomplishment, achievement and success for which few can compare. Consider:

Born in Toledo, raised in Ashtabula and with degrees from Cincinnati and Ohio State, Urban Meyer made it clear from the day he took the Ohio State position – Nov. 28, 2011 – what his intentions are: “We’re going to make the great state of Ohio proud with everything we do.”

With “a statewide approval rating roughly equal to that of free ice cream” wrote David Briggs of The Blade, Meyer has, indeed, made Ohio proud of the Buckeyes.