In my role as Political Director at the Ohio Chamber, one of my key responsibilities is to inform our membership how they can support elected officials who champion issues that spur free enterprise and economic growth.

In 2016, candidates for the Ohio General Assembly were primarily on the campaign trail, making for a light legislative calendar (except for the lame-duck session!). With the election now behind us, and Tuesday’s opening day sessions in the House and Senate, the coin flips in 2017. Gov. Kasich’s proposed biennial operating budget will likely drop January 31st. With Gov. Kasich already warning of a tax revenue shortfall, we must stay vigilant to ensure Ohio’s business climate remains competitive on a national level.

OCCPAC endorsed candidates went 76-0 on election night, a new record for our organization. That accomplishment means nothing if legislators are not held accountable in advancing the pro-business policies that they campaigned on.

Our colleagues at BIPAC commissioned a market research survey on employer-to-employee election and policy advocacy. The key finding of the study state that employers are the most credible source of information on public policies and candidates that affect jobs, companies, or industries greater than both political parties combined. Additionally, the survey states that the majority of Americans want their employer to be active in promoting public policies and a majority tend to agree with their employer on public policy issues related to their interests. 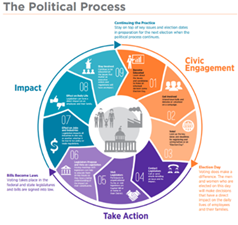 Employees who received information from their employer react in predictable ways:

•They are more likely to research their industry and public policy issues.

•They are more likely to vote.

•They are more likely to become habitual participants in the process or become civically engaged.

It is my hope that you share the Ohio Chamber’s policy & political content with your colleagues and employees to help us build grassroots consensus as a business advocacy organization.

If you have any questions about developing an advocacy program for your organization, please contact me at 614-228-4201 or rthompson@ohiochamber.com.